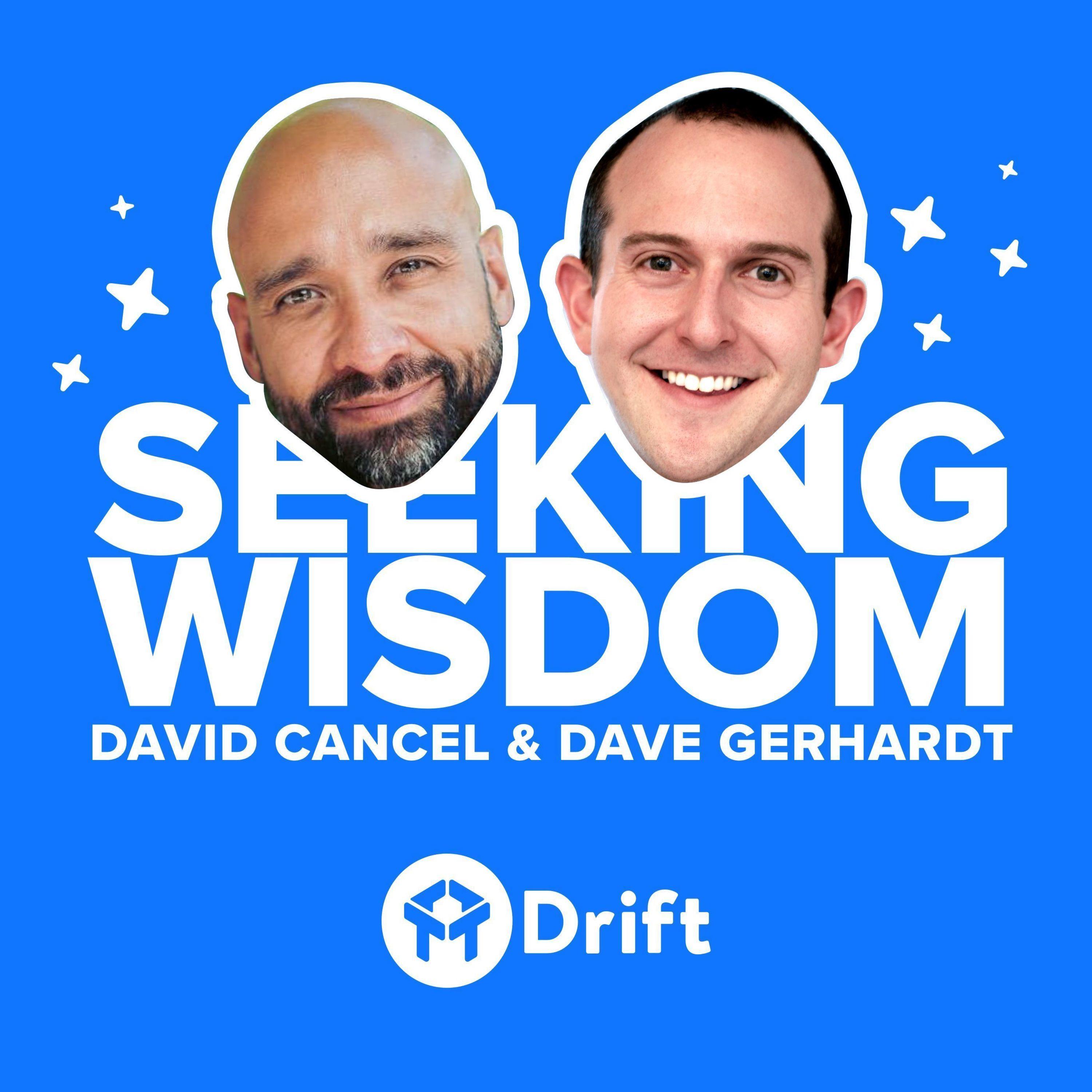 17: Why The Early Days Of A Startup Are Like Wandering Through The Desert

17: Why The Early Days Of A Startup Are Like Wandering Through The Desert

Speaker 1: Today I'm seeking wisdom. We're going to talk about why startups are wandering through the desert.

Speaker 1: All right. So I heard you say this the other day, it was a good analogy, a story, which you've been full of lately.

Speaker 2: Full of what? The stories?

Speaker 2: That's what happens when you age.

Speaker 1: No, all your analogies are on point. And you said," The early days of a startup or any new project, maybe you don't even have a startup, are like wandering through the desert." And that really resonated. So I want you to tell that story.

Speaker 2: Sure. So I think it's a story I think about a lot. And I think early days of a project or starting a company, the best kind of analogy I can pick up is this idea of walking through a desert. So imagine a desert... You land magically in a desert and you look 360 degrees around you and wherever you look, the horizon looks the same, right? So there are no landmarks that you can go towards. There's no obvious way out of the desert. And to me, that is like the early days of a new project or the early days of starting a company where you're doing things each and every day. But you don't know if you're moving forward, if you're moving backwards or you're moving to the left, are you moving to the right? In other words, you don't know if the thing you did got you closer to your end goal or got you further away from that end goal.

Speaker 1: Yeah. I think that's great because if you think about it, you just have no idea. But § how do we... What's your advice? Then what do you do if you don't have any landmarks? What do you look for?

Speaker 1: See this is why I want to have this, because this is not an answer that people want to hear, right?

Speaker 2: You make them up then. And yeah, people don't want to hear them.

Speaker 1: Yeah, I think that's a really good point because a lot of people will hear this and say," Oh, you're not data- driven..." Or whatever, but in the absence of data, all you're doing is tracking everything as it's happening. And then you're going to reevaluate.

Speaker 2: I think what people forget all the time is that data is a lagging indicator, right? So data is the equivalent of looking in the rear view mirror. And you driving a car, if you're going two miles per hour, only using your rear view mirror can work well, but the faster you go and the faster you accelerate, the harder it is. So try driving 50 miles an hour, a hundred miles an hour, full speed only using your rear view mirror. And that's the equivalent only relying on data. There's some extrapolations you can make, but those are past records of past performance, right?

Speaker 1: All right. So I want to talk about hiring based on this topic. If you don't know where you're going, there's no landmarks. How do you figure out who to bring with you at this stage?

Speaker 2: Great way to think about it. Because one of the dimensions that I think about hiring a lot these days is, that I didn't realize in the past, right? And I learned this mostly like we learn new things, making mistakes. And I'm trying and sharing all this stuff, I'm trying to save some of you from making the same mistakes based on my mistakes. And what I did was, what most people do, which is try to hire people based on a perceived need that you may have, right, in the company. Based on their experience, based on their intangibles, and that can be their personality, their passion, their hunger, their fit within the company, and kind of trying to take those tangibles and intangibles together, and then try to make an informed decision about hiring someone, right. The thing that I didn't realize was just as important and most people miss it as this third dimension and this third dimension is the stage. So you can hire, and I have hired people, who were great experience, great fit, great teammate, perfect person. Everything was great. The only thing that was wrong was the stage that we were hiring them for was the wrong stage for them. And so an example would be like, maybe their experience was two stages ahead of where your company may be today, or your team may be today. And so trying to hire too far in advance with lead someone, who's great on those other two dimensions to come in and not be successful because all of their past experiences, leading them to decisions that are based on a stage that is inappropriate right now, right. And you end up with them feeling like everything that they do is wrong. You feeling like they're making the wrong decisions for this stage of business and kind of had this thing where you're kind of out of sync, right. You're out of sync. And so now I start to think about the right stage. And now when we're talking about the desert stage, we're talking about the very early stages of starting a company, business, a project, and then you really have to think hard about this stage appropriateness. And is this the right person to bring in at this stage?

Speaker 1: Yeah. I think stages is something that you talk about a lot. And I think that's a really good way to think about things. It's just always a reminder of like what you're doing based on the stage that you're at.

Speaker 2: Totally. And I think it's, to me now having experienced it, it's like one of those simple, but not easy things. It's one of those, oh yeah, it's obvious they should be at the right stage. But then when I talk to everyone and I look at past performance, including my own, nobody actually does it. It's just again like my... I always say it's just like losing weight, eat less. Okay. Nobody does it. So it's harder than it seems, right. And it's easy to dismiss and be like," Yeah, everybody knows that. Of course that'd be the right stage." But no one does it.

Speaker 1: And we talked about this recently. So if you go back a couple episodes ago, we talked about setting goals and how this quarter adrift, we set a goal for... Our company rallied around signups, right. Now, if you take a company, a big public company and you rallied them all around signups, that company would go to shit.

Speaker 2: Different stage. And that worked for us. That was kind of back to the idea of being in the desert. That was how we could set based on some intuition, some past experience, some arbitrary, and they were completely arbitrary goals. Why is it 1000 business users? Why is it 2000? Why is it 5, 000? How'd you guys come up with these numbers? It doesn't matter. It doesn't matter really, at the end of the day. What we needed was some goalposts to be aiming at, to kind of lead us in the right direction. And now having done that, lead us out of the desert and lead us to where we can see the horizon. And now look at the mountain ahead of us and look at, the mountain after that, and now begin to optimize and say," What is the best path up this mountain?" That's a totally different stage than we were in before.

Speaker 1: Yeah and that's what we did, right? We set a goal kind of based on some... We licked our finger and kind of check which way the wind was going. And then based on some like benchmark conversion rates, and then now we're looking at Q3 and we just kind of... Okay, we have a benchmark now. Now we can... And every month, every quarter, we're going to keep adjusting that goal. Last thing I want to ask you is, how do you know when you find something? How do you know that one or two really passionate customers are... That's your market? Or how do you know that's just like a one- off person?

Speaker 2: Well, in the desert it's pretty... It's hard because you're... Like you say, it's small sample size. So it's going to be 1, 2, 3, 10, 50, whatever the number is. And so it's hard. And the answer is obvious, but no one wants to hear it. You're going to have to make a best guess at this stuff. An informed guess, it doesn't have to be random guess. But it's going to be your best guess on whether to lean into that or to lean away from that. And that is where our intuition has to come into play and that's where our own kind of discretion comes into play, right. That's the difference between good leaders, great leaders, poor leaders, right. Is those intangibles of how do you make this decision? It's not... If it was purely database and purely metrics based then, and no humans were involved, then everything would work perfectly. But there are humans that are involved that are biased, who have past experiences. And so there isn't enough data. And so you need to to make those guesses.

Speaker 1: § I'm glad you brought that up. People would say," Yeah, yeah. But what about after you get to a hundred, are you going to be able to get to a thousand?" When you have no customers, then tell me about that problem when we get to 100

Speaker 2: Totally. Totally. Yeah. And it's... Jason does it about customers. You can do it about revenue. How do you get to a million dollars in revenue? All right. Take out a calculator and say, can we get 500 people or 2000 people let's say to pay us 500 bucks or... Yes. Are there 2000 people on the planet, or 2000 companies on the planet or 500. Whatever number you want to use, companies on the planet, that can possibly pay us this much. Yes. Okay. So that's probably as much as you need to know. It is within the realm of possibility. And so now you can go off and do that.

Speaker 1: Yeah. All right. We got to wrap because after this, you're going to do a little podcast cheating. You're going on Buffer's new podcasts. Which will be fun. So keep an eye out for that.

Speaker 1: Please do. And also just a quick shout out. So thanks for all the support for the show, but also everybody's kind of... We've run into a lot of marketers and sales people kind of rallying around this movement about... We started it with no lead forms, but it's really kind of transpired into like, just treating people like people and one- to- one relationships when it comes to marketing. So it's awesome to see everybody tweeting and sharing links with us about that stuff. So keep sending it.

Speaker 2: Yeah. We're just not two guys on the end of a podcast, like reach out to us, send us email, hit us up on Twitter. Hit us up to anywhere that you can find us online. And we'd love to talk to you. We'd love to get feedback and we're here to learn just as much as you are.